At the end of the summer, I stumbled upon the movie Last Night. Over the course of the last few months, I have seen the movie several times and I can’t get it out of my head. Written and directed by Massy Tadjedin, the movie was released in 2011, but actually filmed in 2008. Last Night draws comparisons to films like Closer with four main characters woven around the themes of infidelity and temptation. (This review/overview may contain spoilers.) 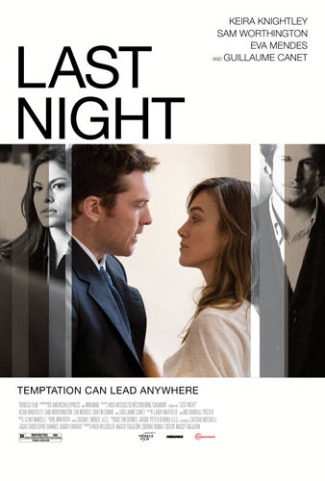 The story plays out over the course of a day and a half in the lives of married couple, Joanna (Keira Knightley) and Michael (Sam Worthington). Last Night refers to each character’s temptations and activities when Michael goes to Philadelphia on a business trip with his co-worker Laura (Eva Mendes) and Joanna unexpectedly meets up with her former love Alex (Guillaume Canet), in New York for a meeting with his publisher.

The movie is pretty and stylish, but it feels real, not an overly impossible Hollywood-view of life in New York City. Joanna and Michael are seemingly well-off with a large apartment and have success in their respective careers, Joanna is a writer and Michael works in real estate development. They are a young couple, drawn to each other as much from familiarity as they are together to help provide the other’s armor in the cold, dark world. The movie opens as the couple rushes to head out the door for a cocktail party. It’s only right before they step inside to the party that Joanna pauses and asks Michael, “How are you?” and laughs. Michael loses his solemn demeanor and lights up in his wife’s presence in that moment, but it’s also a moment of routine. This couple is intimate and affectionate, but they’re far from the honeymoon phase. The cocktail party kicks off the story when Joanna observes Michael chatting alone with Laura on an outside balcony. When they meet, Laura knows all about Joanna, but it is obvious that Michael has barely mentioned his beautiful work colleague to his wife. A fight ensues when they get home and it’s the battle that spurs on the story about whether or not Michael is attracted to his co-worker and whether or not he has acted on it. Even though they make up before Michael leaves for his business trip, in a sweet late-at-night breakfast made by Michael of eggs and toast, the damage has been done. Tellingly, Michael apologizes, even when he admits he doesn’t really know what he’s apologizing for.

It’s the glimpses of the outsiders in their lives that we see another side of how they function and operate as a couple. Michael’s best friend complains about his recent breakup to Joanna as if she is his best friend too. He complains, “Why is it so hard for me, Jo?” Joanna answers in a soothing and yet weary way, “It isn’t. I mean it can’t be. You haven’t got to the hard bit yet.” Michael is Joanna’s biggest cheerleader in her work as a writer and it shows when Michael’s boss approaches Joanna, “Michael tells me you’re working on a new book.” Joanna harumphs it away with, “Michael always says that,” and laughs.

The day begins. Michael and Laura are on the work trip together and so begin the temptations. Even on the train, he’s looking at her with interest, while fighting to hide it. Did the fight with his wife highlight or enhance the attraction? She notices. Is she trying to attract him?

Joanna is left alone in the apartment in wool socks and a robe, with what looks like a big empty day in front of her. She tidies the apartment and then goes out in the world in her grubbies, sweat pants and bulky sweater and a huge knitted scarf, to her neighborhood coffee shop for coffee and a muffin (Knightley still looks radiant). Outside on her return home, she meets up, as if by magic, with her long-ago love Alex. He’s a sexy French writer and you can see that her behavior with him is different. Alex is in town for one more day and asks if he can see her later. After a slight hesitation, Joanna smiles and agrees. They make plans for a call later to firm up details. Joanna seems surprised, but it’s obvious that Alex is somewhat in her life, he knows her number and he is in her neighborhood, perhaps looking for her, because he admits that her Christmas cards have a return address. She returns to the apartment for a day of writing, and then reminiscing when she makes plans with Alex and pulls out a stash of his pictures hidden in a book high on the shelf. Would she have made plans with Alex if Michael was home? How often is she in contact with her ex Alex? Would she be remembering an old romance if the terrible fight hadn’t occurred?

The rest of the movie is cut between the two evenings. Michael and Laura meet for drinks after the work meeting, ditching Michael’s best friend and work colleague. Then they go to another spot for more drinks and a sexy dip in a hotel pool. Michael fights his shyness and Laura is forthright about her attraction. They talk about monogamy and temptation and the evening progresses further. Michael admits to Laura, in a sentence which could be a summary of the film, “You can be happy and still be tempted.”

Joanna meets Alex for drinks which then leads to dinner with Alex’s friends. They behave as if in a couple, but the fact that she’s married keeps facing them. Alex’s friend Truman (played by Griffin Dunne), older and wiser and just as sexy, plays the devil’s advocate throughout the evening at dinner and later at a large party, asking what everyone else is thinking. When Alex and Truman’s wife go outside for a cigarette, Truman asks Joanna, “Do you think you’ll tell your husband about tonight?” Joanna demurs, “I don’t know, tonight’s not over yet.”

We see Michael and Joanna differently. They behave differently with others. Is it just the night away? How does one person represent a different path? Does one evening change the course of a marriage, of lives?

The morning comes and with it regret and pain and more. Joanna and Alex have spent the evening together in intimate conversation, but they don’t sleep together, but stay in embrace until the tearful goodbye. Joanna returns to the apartment in tears. Michael wakes up and quietly leaves Laura’s hotel room and it’s obvious they’ve had intimate relations, in Laura’s words “twice.” Michael goes to shower and change and finds a note of apology from Joanna. He quickly changes course and skips out of the business meeting and takes the first train home. Laura is faced with his change of mind when it’s time to leave for the meeting. Her face shows that she is disappointed and knows that it is over. She takes a breath and slips back into a neutral work facial expression. Mendes does a wonderful job of showing a woman stoically trying to nurse her heart.

The movie is quiet and complex and the conclusion is open-ended. You don’t know if either Joanna or Michael will confess to Last Night‘s activities or to the emotional complexities underneath. There’s physical and emotional betrayal. What will come of it? The movie’s musical accompaniment is beautiful and quiet and understated, but it reflects the complexities of the story. I love that there is no judgement in the film, that I can reach my own conclusions and judgements and that I’m not being pulled to think one thing or another. I like ambiguity in a story, because we each bring our own black/white realities and perspectives in with our viewing. I look forward to other works by the young, gifted writer and director Massy Tadjedin. Wonderful cast, great acting, a conversation starter, a lovely movie.