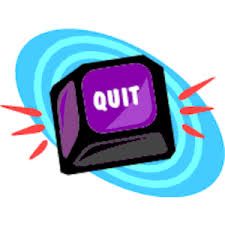 A couple of months ago the world observed Pope Benedict’s last day as pope. While I’m not Catholic, I grew up in heavily Catholic northern New Mexico and I have lots of Catholic family members and friends. I remember after Pope John Paul II died and listening to the radio about the conclave and what it meant to select a new pope. Now I think about the man, who is only the second pope ever to resign. I don’t know all the politics of that decision, but from the little I know and what I have read, I consider that an amazingly brave and humble act.

Usually quitting is considered a negative thing. In our culture, we are encouraged “to try, try, try again.” Mostly quitting denotes failure. Think of the CEO who quits after not succeeding with a turnaround plan for a faltering company. Think of the coach that resigns after losing seasons. Think of someone who leaves after scandal.

Sometimes, though, quitting can be a positive thing. Reflect on the person who sobers up and finally quits drinking. Remember the smoker who takes her last puff. Sometimes quitting isn’t so much about stopping one thing, but getting the chance to try something new. Consider when one has resigned to start a new job. Ponder the break-up with a boyfriend or girlfriend that was positive for everyone in the long run.

I can think of times where making the decision to quit was big and scary, but equally freeing and a huge relief. It helps to have the vantage point of hindsight, and time to heal the wounds, to see that quitting was indeed the right decision. In no way am I comparing my little decisions with the complexity and controversy of Pope Benedict’s, but we all are faced with making tough choices in our own lives. They render us sleepless, breathless, listless and they help us to grow and love and live. We use prayer, thoughtful reflection, lists of pros and cons, the listening ears of comrades, and muffled cries into a silent night to make those painful decisions. Here are some of my quitting times in chronological order.

1. Dumping the high school basketball team in my senior year. I went to a small high school and sports were one of the few opportunities to participate in school activities. I played volleyball, basketball, and ran track, in addition to participating in newspaper, student government, and two other clubs. While some high school coaches were inspirations and mentors, it was hard to respect the tyrannies of the basketball coach. Believe it or not, it had nothing to do with the fact that I was not a good player. I had a good attitude and used practice to stay in shape for track. By my senior year, though, I had just had enough. I quit after the mid-year break, shocked the school, and blind-sided the coach. After the painful confrontation, I had peace and freedom that winter that I hadn’t enjoyed in a long time. It also made me realize it’s important to consider what you spend your time doing and how little and big decisions affect others.

2. Resigning as editor of the college newspaper. Almost 20 years later, this decision hurts to this day. I was in over my head with work and school and editing the paper. With 20/20 hindsight, I should have applied to be the editor as a junior or senior, instead of in my sophomore year. I didn’t have a good command of the Mac and layout software, and after two months of no sleep, it didn’t feel like things were improving. With sand-paper eyes and a weary disposition, I walked over to the communications office to turn in my resignation letter. It was one of the hardest, but most freeing decisions I have ever made. I was also excited to see that the folks I had hired to be assistant editors ended up leading the paper together for the next two years. I was also lucky and grateful to be asked to contribute to the paper as a writer for the remainder of my time at school.

3. Quitting a job after just a year. It was my second “real” job after college, but it had been horrible from the beginning. I wasn’t a good fit in terms of how my skills worked with the job description that changed as soon as I was hired. I quit, but I’m sure if I had stayed I would have been fired eventually. I resigned without having much savings or a back up plan, but luckily found a really good job less than a month later. I learned a lot from that decision and that job; it’s helped me to better evaluate organizations and how my skills fit and what I can contribute. I remember what a relief it was to wake up without dread and butterflies in my stomach. Since that time, more than 12 years ago, I have not ever dreaded coming to work. I have worked for two lovely and wonderful nonprofit organizations and continue to enjoy the thrill of the ride and what I do.

4. Giving up on a relationship. On the surface, it looked like we were a good fit. We laughed and made salads together and shared housekeeping duties and went on hiking adventures. It was the only time I have lived with a significant other, having never been married. He was moving for a new job and it was assumed that I would come along at the start of the summer. It was in the time and space and distance of the winter and spring apart that I woke up to listen to my heart. We broke up, he moved to Missouri, and I stayed in Colorado. He was a gentle man, but I realized we were not meant to be together. There was no big fight, no big transgression, just a recognition of a lack of compatibility and something we had been forcing all along. We remain good friends and have served as each other’s confidantes in our romantic adventures since then. It was wonderful to let go, heal, and with time, come back together as friends.

5. Saying no to soda and diet soda. I have been a coke addict for 20 years. (I’m red-faced and cringing as I type this). In the southwest, you are asked what kind of coke you’ll have and then offered Pepsi, Coke, 7-Up, Dr. Pepper and all the other choices. . .In other parts of the country, it’s pop or soda. Anyway, it’s a habit I’ve harbored and hidden for a long time: cans under the dorm room bed, cans crushed under the car seat, bottles taken out to the recycling in the dead of night. It defied my beliefs in how to treat my body. It conflicted with my ethics in terms of companies I want to support. It proved to be incongruous with my purported conservationist and environmental views. It has only been five weeks, but I don’t have the craving any more. I also can better taste all the drinks I do love. When the urge does come for the cold can, I reach for my water bottle or cans of seltzer. Phew, it feels good to be free of the habit and it feels amazing to let go of the ghosts of my secret obsession.

What have you quit that led to a big sigh of relief? What did you leave behind that allowed you to move forward? When has saying no allowed you to say yes?

I am a composter, an environmental educator, a runner, a writer. View all posts by Kary Schumpert @runningintolife